I've been going nuts with the painting recently with all the hype around the expansions being sent out. Got everything I need painted to get started playing the game now. Now I just need to find some unfortunate souls to play it with. 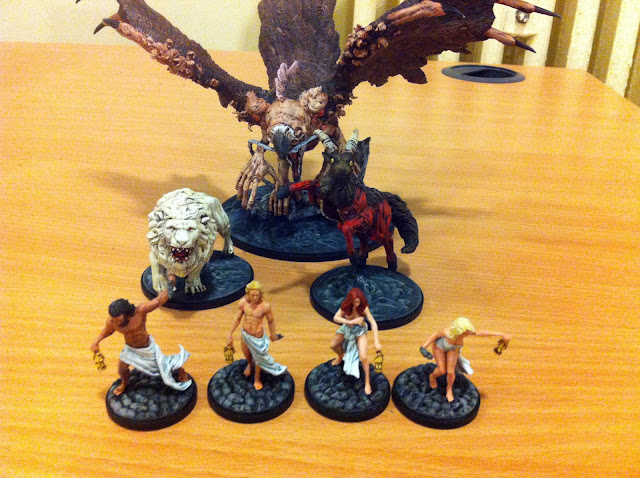 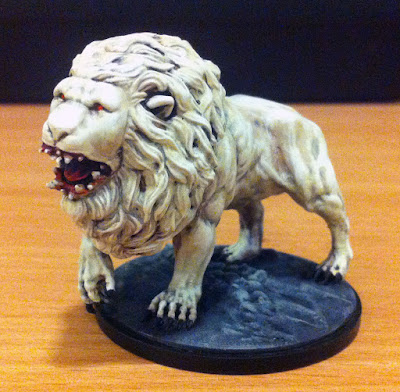 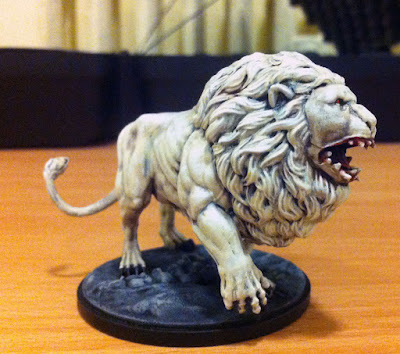 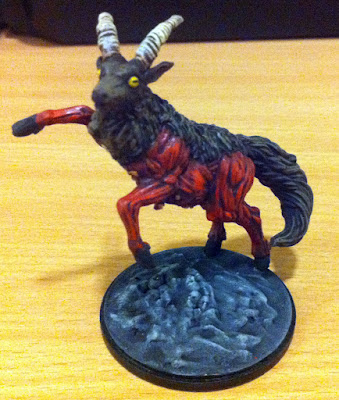 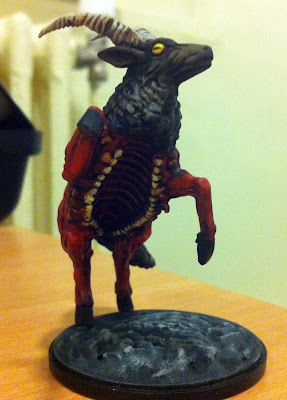 With the Kingdom Death expansions from the Kickstarter being sent out in the post now it gave me a kick in the backside to actually paint some of the models. I have started with perhaps not the easiest model from the game, the Phoenix. The Phoenix is some sort of horror nightmare bird/human hybrid with hands protruding from places that they normally shouldn't be for extra WTF. Assembling the monster was a nightmare too because of all the little hands that have to be individually stuck on and they only fit in certain places and there were no instructions, luckily some people on the web have posted up instructions of what fits where but it was still hard work. The rest of the model went together easily and being plastic there was no pinning necessary.

This model seems at the same time to be really detailed and not really detailed. It was relatively quick to paint as there were lots of details but they were repeated, i.e. lots of hands, lots of feathers etc. rather than a say a GW inquisitor model with lots of individual unique details requiring different colours. The hands were a bit of a pain because of all the different angles to paint but the result was worth it. I tried to paint it like a vulture but somehow ended up doing my usual generic flesh colours, whatever works and is easy I suppose.

I didn't take a picture of his backside, you can google that if you want to see why lol. 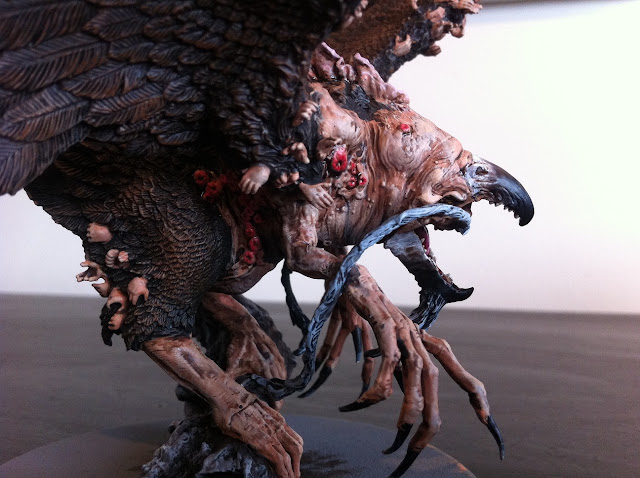 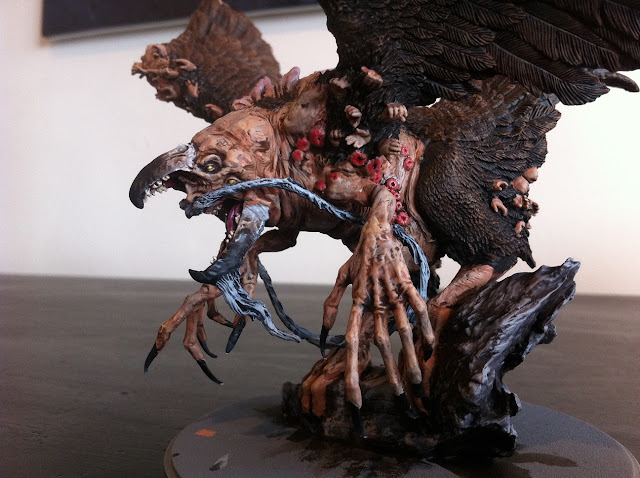 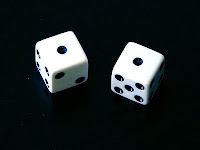 Wraiths are hard to kill already, with 2 wounds, toughness 5 and a 3+ invulnerable save. It takes a lot to kill them in their standard state. What happens though when you have them in a Canoptek formation in a Decurion detachment. Madness, thats what happens. Here is the maths behind killing wraiths when they have a 3+inv save and 4+ RP.

Shooting the wraiths with Bolters from Marines

Shooting the wraiths with Krak missiles from Marines


So basically wraiths are nearly impossible to kill by simply shooting them with guns. They do however have a big weakness. This formation requires a single Canoptek Spyder (Tomb Spyder in old money) to give the formation RP rolls and it needs to be within 12". Either kill the spyder or somehow force the the wraiths away from the spyder. The spyder has to be by itself, not a squad of 2 or 3 spyders, so it is quite vulnerable but it will also have RP too, so T6 with a 3+ save and 4+ RP rolls will also be quite hard to kill. And don't forget the scarabs in the formation will also have 4+ RP rolls, which is just funny.

Necrons as a whole seem stupidly resilient with the Decurion, but seeing things with a 2++ re-rollable save I don't feel too bad about this. While our army is hard to kill, we don't put out that much damage and this (sort of ) balances things out a bit.

Some quick(ish) math-hammer on the Necron Decurion detachment

So, I was a little bored at work today and a probability question has been bugging me for a while. What is the probability of killing Necron Warriors when they have a 4+ save, followed by a 4+ RP (Decurion) and re-rolling 1s due to the warlord being within 12 inches. The re-roll RP (Resurrection Protocol) rolls of 1 had been the bit that I was stuck on. So today I did some calculations on a spreadsheet to work things out.

TL DR, it takes approx 13 shots from a marine with a bolter to kill a warrior. Without the re-roll of 1s, it takes approx 12 shots to kill a warrior. Doesn't sound like much of a difference, but when you have a big blob of 20 warriors the maths looks a little more impressive. It takes approx. 262 bolter shots to kill all 20 warriors!!!! That is insane! Without the re-roll of 1s it takes a mere 240 shots. I suppose its still not a huge difference. The main point is that it takes an insane amount of shots to kill Warriors in a Decurion detachment. When you add in things like 3+ saves on Immortals or 3++ saves with RP on Wraiths you're in crazy territory. I haven't worked out the maths for that. Maybe tomorrow.

With guardsmen with lasguns against decurion warriors you may as well pack up and go home. To kill 20 warriors (without re-rolling 1s) it takes 480 lasgun shots! 24 shots to kill just 1 warrior.

I will try tomorrow to get the missing bit of math for the re-rolls. The end answer is still correct I believe, I just can't remember how I did the last bit of calculation.

I think the lesson to learn from this is don't bother trying to kill warriors with bolters because you will be rolling dice all day. The Decurion adds quite a chunk of extra resilience to and already resilient army for only the cost of loosing objective secured and being forced to take particular units. I don't think its much of a tax and having wraiths with a 3++ and a 4+ RP roll with 2 wounds at T5 is just plain wrong.

Like with any math-hammering and with my dice and rubbish dice rolling hands this will probably fail to stand the test of real life (real life toys anyway) battles.
Posted by Towers at 20:35 No comments:

First game of 7th edition wasn't so bad after all

My warlord trait gave all models within 12 inches of the warlord Relentless and Crusader.

I managed to get a game with a guy practising with his Daemons for a tournament in October. He had Kairos, using the grimoire of true names for a 2++ re-rollable, some champions, 2 squads of pink horrors, some blood crushers and some plague drones. He had enough psychic power cards to wallpaper the room!

Deploying 6 numbered objective was a new thing for me and the fact that one player deployed them all.

He deployed his forces stretched out along his deployment line. His fatal error at this point was deploying Kairos opposite the wraiths, hidden behind ruins, but opposite them none the less.

The entire battle basically involved him summoning daemons and me shooting and killing them. He had a few shooty psychic powers but these didn't do much. 40 rapid firing gauss shots that re-roll 1s to hit and to wound made a mess of anything that went near my army. He deepstruck his big squad of plague drones near one of the squads of 20 and I shot them and then charged them (due to relentless) and made a mess of them. Necron warriors charged something and won combat!

My wraiths charged up the side of the board and by turn 2 were in combat with Kairos. This seemed like a waste of the wraiths as they couldn't really hurt him due to his 2++ re-rollable but it was a major game changer. Kairos is utterly crap in combat, 1 attack and 1 WS. The wraiths spent 3 game turns locked in combat with him and only knocked off 2 wounds. He charged the wraiths with plague bearers with 2 champions in the squad, and the wraiths just kept shrugging off the wounds. By the end of turn 4 there was one wraith left in combat with Kairos, plague bearers, 2 nurgle champions, a squad of horrors and a nurgle greater daemon had just been summoned next to the combat. The rest of the table however was at this point devoid of any other daemons. He had summoned bloodletters, blood crushers and other things and they were all dead too. My army had lost 5 wraiths and 4 warriors..... He threw in the towel at this point, quite understandably.

Objective wise I had got First Blood, I killed a squad in a shooting phase and I held an objective. He had only held an objective. The new objective system is certainly different now, with the getting 3 cards and changing them whenever they're achieved etc. Its a more interesting way of doing things compared to the old end of game objectives but I do think they're a bit messy. My other two objectives which I didn't achieve were, kill a monstrous creature and kill the enemy warlord. The only way I could get those were to kill Kairos with his damn 2+++ save. God I had that combo.

So I won my first game of 7th. Wasn't expecting that. I don't know what I was so worried about. There are a few changes but it is still more or less the same game as 6th edition. I'm not sure if I like the objectives and I still don't like the way psychic powers work with their randomness and cards everywhere, I prefer the old style where they're basically like wargear with a perils of the warp test.

Once I started moving models and shooting stuff it was as if I had never stopped playing. It all came back so quickly. Now I'm looking forward to next Monday and my next game of 40k. Maybe using my scarab farm this time.
Posted by Towers at 19:29 1 comment:

After nearly 2 years to the day of not posting I'm back. I have been on hiatus from 40k for a variety of reasons, mainly because it stopped being fun and then 7th changed 40k beyond recognition for me. I have spent 2 years working on model railways instead. Which was relaxing and there was no pressure to win win win.

Well, I have now moved due to work and there is a wargaming club where I have been sent. So against my better judgement, I find myself sliding back into it. I'm a little bit miffed about the costs of simply getting back into it though, 1 codex and the rulebook is all I need. Just that comes to £80!!! WTF!! I have found a cheap rulebook on ebay for £20 but I think I'll have to pay full whack for the necron codex. I have access to the necron codex though and I'll write up a list and see if I can get a game at the club tomorrow night.

So much seems to have changed since 6th edition 40k and the old codex. I don't have a clue what the deal is with formations and pretty much everything seems to have been tweaked or changed. My flayed ones might actually get deployed at some point now, I just have to find them all in the loft and reattach various arms that have come off.

I think I'll start off with a simple army to get back in the swing of things. Lots of warriors, a destro lord to lead a big squad of them for preferred enemy, a couple of ghost arks and some wraiths if I have spare points.

So much stuff to try and take in. There are 4 new armies since I stopped playing... how did that happen??
Posted by Towers at 21:49 No comments: